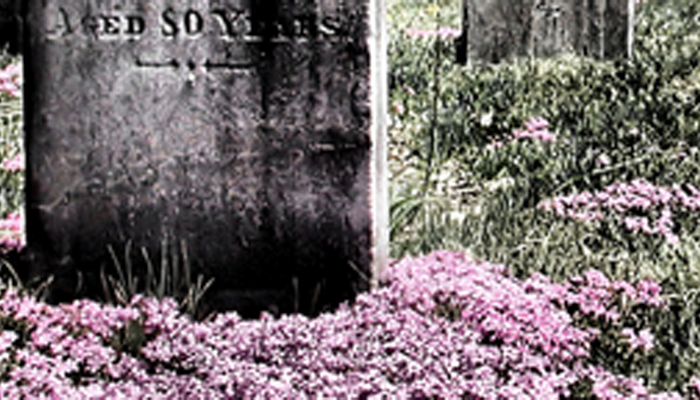 One of my former jobs involved a lot of travel. I had the privilege and good fortune to travel to a lot of places: some near, some far away, some magical, some memorable, some I will never return to, and some harkening back to times long ago. One of my trips placed me in Dublin, Ireland with a few days of free time. Well, let’s see… Lots of free time, a country older than I can fathom, a very large sense of adventure – Dublin, here I come! On foot, of course.

The experience on foot is always a bit different than when you’re in a vehicle, things close-up tend to be a bit more vivid with much more detail; instead of just waving, the people say “hello” and often stop to talk – what can be learned from listening for just a few minutes; and, there are many places you would never consider stopping as you speed by on your way to a predetermined destination. Speaking of destinations, one of the destinations in Dublin that day turned out to be a cemetery. When was the last time you went to a cemetery, not for a funeral, but instead just to hang out? I would dare say that very few of you have ever ventured into a cemetery without the intention to pay respects to a departed family member or friend; but I will challenge, if you do step into a cemetery with the intentions I’ll explain below, you may leave thinking very differently.

Before you get freaked out or think to yourself that I must have some really morbid personality trait, it should suffice to say one of the things we are taught early on in life is to remember things because someday memories are the only things you may retain of those who have influenced you. In the Old Testament, God was constantly reminding his people to build altars whenever he had done great things for them. In the New Testament, the last thing Jesus did before presenting himself for death on a cross was to entrust the task of remembering what he had done for his people to those at the last supper; not to be kept for just their edification, but instead to be passed along to every generation of Christ-followers to come.

Back to the cemetery in Dublin, I wasn’t heading in to pay respects to some long, long ago lost relative nor was I going in to remember anything, but instead that day I was just intrigued by the oldness of what I could see from the street. Once I stepped through the gate, the world around me seemed to get mysteriously quiet and things seemed to slow down; interestingly enough, a few years prior to my trip to Ireland I had the same experience stepping into New York’s Central Park and just days before into many of the beautiful parks in the Cities of London and Westminster. The quietness and slowness which I experienced was simply due to the fact that I’d stepped out of the busyness of my life into a place where I could, even if just for a few moments or hours, just be. So, with nowhere to be and no when to be there, I walked around the cemetery.

I’m guessing you’re probably thinking, what would you be able to learn or do in a cemetery – there aren’t a lot of people to talk to (well actually there are lots of people, but they’re not listening, can’t hear you unless you shout really loud, and if they do talk back there would be much more to be concerned about than this blog post will cover)? Luckily I didn’t think about this question as I decided to enter, I probably would have turned around thinking it might just be a waste of time; after all, I’m a zillion miles from home, on a continent I’ve never visited before, and there were still lots of other things to see in Dublin.

Well, with no question to inhibit my entry and the quietness once inside, I began to wander. At first, with camera in hand, I started taking pictures of flowers, trees, flowers and trees together, flowers and trees and headstones together, headstone silhouettes (good thing for spell checker), playing with the speed and focal depth of near and far things, and other nature-related items. Then it dawned on me to start reading some of the stones!

As luck would have it, the first one I read was in Gaelic, and I don’t read Gaelic; but I did recognize something scrawled on the barely legible stone. Are those Roman numerals? How inefficient, maybe it was done for effect or in honor of the person life being marked by the stone. Deciding to see how well my early schooling was comprehended I began to decode the date without the help of my trusty Roman numeral decoder ring… CCC, well that’s (100 x 3), L (there’s 50), X (that’s 10), and IX (that’s one from ten because the little number is first, or 9)… CCCLXIX, hmmm (300+50+10+9 = 369). What? Maybe I should have had the decoder ring, that can’t be right! Perhaps they meant to have an M in front to make it 1369 (but that would have thrown the spacing on the stone off) or maybe my decoding was confused and it was 1969 (but that would have been MCM, not CCC, and obvious); and the stone looked a little, OK a lot, older than 1969.

Wow? In the face of my superb reasoning skills, I realized I was standing at an unreadable, barely legible stone from someone who died in the 4th century! (Note: For those with less than stellar time-keeping skills, we’re in the 21st century now) I can’t imagine what living in the 1700’s was let alone the 300’s. But, here I am… almost 1700 years after this person died. This was less than 400 years after Jesus told his disciples to remember him and to pass that remembrance on to future generations. To carve a stone in that day was probably not easy, the hardware store wasn’t around to get tools and telephones would be years in the future so a call to the headstone company wasn’t possible. Did this person have a stone because everyone got one or because they were important? The size and placement in the cemetery didn’t seem to indicate either of these, but who knows, the cemetery probably looked a little different back then. So now I had a mission…

I started walking around with the intention of finding stones I could read, at one point in time they did change from Roman to Arabic numerals and at another from Gaelic to English. As they got more recent they became easier to read and as they became easier to read stories started unfolding. I learned a lot about a lot of people that day, things which have now slipped my mind. Some stones were very simple with just a few words or a Bible verse reference, such as “Steadfast,” “Loving,” or “John 3:16;” while some were very detailed with a full sentence or many words. Now, other questions came to mind: Were some short because the people had less of an impact on others and they felt obligated to say something or was it related to the cost (I’m guessing those were carved on a per letter basis)? Did some write what they remembered about the person, what they wished to remember about the person, or what they wanted other to remember or wished they would remember about the person? The more I read, the more questions I had and the more I learned about the many people sharing the place I randomly decided to walk into that day in Dublin with free time to spare.

The only difference between them and me… I had the opportunity to walk out of the cemetery. I walked out a very different person than I walked in, my job was the same, my personality was the same, my hobbies were the same, but I had a different perspective on character. I started thinking about what others thought of me, how would they talk about me when I was gone (it hadn’t even crossed my mind that they were already talking behind my back, whether good or bad!). What would be written on my stone? You’ve often heard the cliché, “perception is reality” or “his actions betray him;” you may think you’re the best person in the world, but if that’s not how others see you…

This post closes the first week of 2016, here’s my challenge to you:

If you don’t like what you hear when you ask others about you, or if you honestly wrote stuff for your obituary or funeral that you aren’t really proud or happy about, let 2016 be the year to change your life. There are a few more bullet points for you:

On the other hand… If you see nothing wrong with your life, I congratulate you because I’m far from you! (But just one question: why did you read this far? Just asking.)

I appeal to you therefore, brothers, by the mercies of God, to present your bodies as a living sacrifice, holy and acceptable to God, which is your spiritual worship. Do not be conformed to this world, but be transformed by the renewal of your mind, that by testing you may discern what is the will of God, what is good and acceptable and perfect.

For by the grace given to me I say to everyone among you not to think of himself more highly than he ought to think, but to think with sober judgment, each according to the measure of faith that God has assigned. For as in one body we have many members, and the members do not all have the same function, so we, though many, are one body in Christ, and individually members of one another. Having gifts that differ according to the grace given us, let us use them…

Let love be genuine. Abhor what is evil; hold fast to what is good. Love one another with brotherly affection. Outdo one another in showing honor. Do not be slothful in zeal, be fervent in spirit, serve the Lord. Rejoice in hope, be patient in tribulation, be constant in prayer. Contribute to the needs of the saints and seek to show hospitality.

Bless those who persecute you; bless and do not curse them. Rejoice with those who rejoice, weep with those who weep. Live in harmony with one another. Do not be haughty, but associate with the lowly. Never be wise in your own sight. Repay no one evil for evil, but give thought to do what is honorable in the sight of all. If possible, so far as it depends on you, live peaceably with all.
Romans 12:1-21 (excerpted)