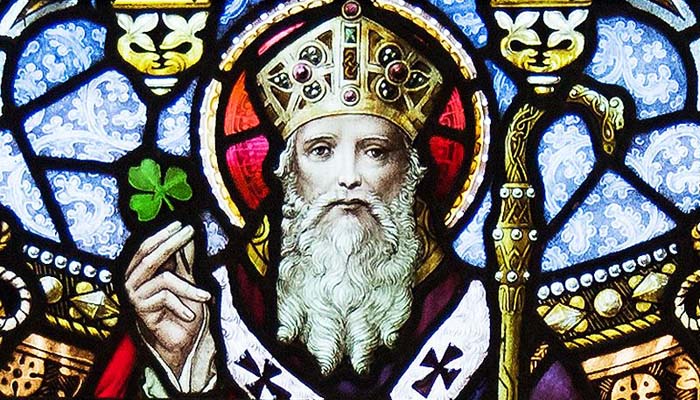 So… This is the week of St. Patrick, the only day of the year dedicated to commemorating a person who has been canonized as a saint. If you’ve found yourself wondering at this time of year, why is it that only one saint has a day of his own, you won’t find the answer here. But, let’s look at who St. Patrick was and what he did with his life.

First, let’s go back in history to sometime around the year 500 AD. Britain was a Romanized colony and was fighting with the Celtic clans of Ireland. The leaders of these clans were druid priests, and their religion was animistic polytheism; they worshiped the sun and moon and other objects in nature, using magic and human sacrifice to appease their gods.

Patrick was born into a Christian family and at sixteen was captured by a band of Celtic pirates, kidnapped and taken to Ireland where he was sold into service tending the flocks of one of their tribal leaders. For six years he tended the flocks in captivity, spending his days and nights in constant prayer. Finally, he heard the voice of God instructing him to run for a ship heading back to his homeland.

Once back home, he began having visions and dreams of the land where he was captive as a youth. Patrick responded to the dreams and visions by training in the priesthood and studying the scriptures, following in the footsteps of his father (a deacon) and his grandfather (a priest), preparing for the day he would return to Ireland.

He shared his desire to return to Ireland with others and probably got lots of encouragement to “reject” the calling. His friends and family were probably saying things like, “Really! Why do you want to return to that God-forsaken, pagan, evil country? Remember, they were the people who kidnapped you and made you tend flocks through some pretty tough conditions, and you were a long way away from those who loved you.” But Patrick had the upper hand, he had a lot of things going for him, but two stood out in particular: first, God gave him the vision and was going with him, and secondly, he already understood the people. Perhaps his capture and tenure in Ireland wasn’t just a coincidence. Perhaps God has intentionally placed him there when he was young enough to learn the language and culture. Think of Patrick as the first missionary to the land of the Celts.

When Patrick and his small party of missionaries arrived in Ireland, this time not of his own will either, but that of God’s calling; they were greeted by one of the druid chiefs who recognized him. This chief offered his group the use of a barn which would become their first church. There he began the process of strengthening the small but growing Christians already living in Ireland, as well as beginning the process of converting the natives to Christianity.

This is where his understanding of their culture shined. He used fire to celebrate the first Christian Easter in Ireland, the bonfire was well received and understood since the Irish were already used to using fire to honor their gods. The “Celtic cross” was also his creation, he superimposed the sun, a powerful religious symbol to the Irish, onto the Christian cross making it more acceptable to the locals. And finally, perhaps the most well-known symbol of St. Patrick’s day, the shamrock – Patrick, while trying to describe the Trinity, reached down and picked up a three-leafed old white clover and using the three leaves in one leaf to explain three persons in one God. Ironically, the last of these is probably just a legend, but a pretty good explanation none-the-less. And the snakes being driven into the sea, rumor has it they’re just legend as well.

What can we learn from Patrick? There are lots of things, so we will just touch on a few:

♣ Look for opportunities, no matter what the circumstances. Patrick was kidnapped, taken to an unfamiliar land. Instead of sulking, he took the opportunity to get closer to God and the people and culture around him.
♣ Always be listening for the voice of God. Patrick first heard the voice telling him to escape, then to return. He was close enough to God, not only to hear but to understand that God wasn’t in conflict with the opposing instructions.
♣ Learn the culture around you. Patrick had the opportunity to use the local customs and culture to introduce Christianity to them by incorporating what the Irish were already familiar with.

Two words of advice come to mind, the first from Peter:

Dear friends, I urge you, as aliens and strangers in the world, to abstain from sinful desires, which was against your soul.
1 Peter 2:11

And, the second from Paul:

For though I am free from all, I have made myself a servant to all, that I might win more of them. … I have become all things to all people, that by all means I might save some. I do it all for the sake of the gospel, that I may share with them in its blessings.
1 Corinthians 9:19, 22, 23

Are we acting like the world belongs to us? Perhaps this is all we deserve and heaven is not for us.

Are we busy trying to teach our Christian traditions and culture to the world, or are we trying to bring Christ to the world? They are not the same thing.

Maybe now is a great time to tell people about the Trinity using a three-leafed old white clover … there are enough of them around this weekend. 😉

"Excellent speech is not becoming to a fool, Much less lying lips to a prince." ~ Proverbs 17:7

"Adventure is not outside man; it is within." ~ George Eliot

"Plant thy foot firmly in the prints which His foot has made before thee." ~ Joseph Barber Lightfoot

"Most folks are as happy as they make up their minds to be." ~ Abraham Lincoln

"The man who does not read good books has no advantage over the man who cannot read them." ~ Mark Twain